skip to main | skip to sidebar
Because of various problems with Blogger, I've copied everything as of November 26, 2012 over to WordPress. The new location is Ask the Scientologist. I am not deleting this blog and will still accept comments and answer questions here too, but any new articles will appear at the WordPress location. I apologize if this causes any problems.

It is well known that the Church of Scientology loves to lie. It seems like they lie even when they don't need to, just "because".

Back when Hubbard was running around in ships, his crew was always taught a "shore story". This was the official lie about his ships that was to be told when ashore. It was always an "acceptable truth", or in plain English, a lie.

Scientology churches, missions, groups, and front groups always have official "shore stories" that they tell to outsiders. Scientologists are taught the correct "acceptable truths" to tell. Nothing is as it seems. That's the Scientology way.

Unlike other churches, the Church of Scientology actually has people assigned to the job of making up lies, in the Office of Special Affairs. Isn't that nice?

A subset of Scientology lies is the Scientology Fakes. This is where the church manufactures evidence. When the real world doesn't agree with Planet Scientology, the church will just create the necessary "evidence" to support their lies.

One of the most famous examples of this was "Operation Freakout". Operation Freakout was the name given by the Church of Scientology to a covert plan intended to have author and journalist Paulette Cooper (author of the critical book The Scandal of Scientology) imprisoned or committed to a mental institution. The complex plan included stealing stationery (with her fingerprints) from her apartment and writing bomb threats. The plot almost succeeded, but the Federal Bureau of Investigation discovered documentary evidence of the plot during an investigation into the Church of Scientology in 1977.

Fake evidence. Fake threats against themselves.

Aside: Understand that, on Planet Scientology, it is perfectly OK for someone to be sent to jail for a crime they did not commit. That's Scientology!

Framing people is standard Scientology tech. Another example is the attempt, in 1976, to stage a fake hit-and-run accident and frame then-Clearwater Mayor Gabriel "Gabe" Cazares. Mayor Cazares had spoken out against the Church of Scientology after it had used big lies and tricks to sneak into his city of Clearwater. How dare anyone object to that?

Aside: You see, it isn't yet a crime to speak out against Scientology, so the church thinks it's OK to frame someone so that they are appropriately punished for actions that, on their planet, should be crimes. Get it?

Of course, the church will claim that these are old crimes, and they've reformed. Really they have. They don't do that sort of thing anymore. Nosiree!

The Church of Scientology produced a video containing much nastiness, including vicious bomb threats against itself. The church produced this nasty video, and then tried to convince everyone that Anonymous had actually made the video and the threats. Unfortunately for the church, the whole thing was debunked.

But you see, things have not changed one little bit. The Church of Scientology hasn't reformed. They continue to try to frame critics with fake evidence. And they still think it's right!

There are many other examples and stories about Scientology Fakes, including one whole taped message purporting to be from Hubbard in 1984 called "Ron's Journal 38, Today and Tomorrow: THE PROOF" which was scientifically proven to be not from Hubbard at all.

However, the most recent faked evidence includes, ironically, one of the oldest pieces of Scientology Fakes: The "Brainwashing Manual".

There was a recent, "confidential briefing" for Scientologists, to "fully" brief them on the current attacks on the church. The briefing was an amazing collection of lies (excuse me, acceptable truths) about the current situation. One of the "facts" was that the current enemies of the church were operating out of an old booklet "BRAIN-WASHING Synthesis of the Russian Textbook on Psychopolitics". 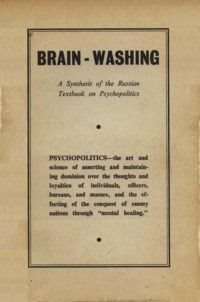 Now this is exceptionally funny because this booklet was one of the earliest Scientology Fakes and was actually written by Hubbard himself.

Here is the story from John Sanborn, who had been the editor of Hubbard’s books since the early fifties. He was there in 1955 at the manual’s inception :

I suggested it. Just kidding around on his front porch. Slygo Avenue in Silver Springs, Maryland. Talking about how are we going to get these psychiatrists.

I said, “What we need to do is take over their subject. What we need to put out is a manual of psych-military something or other ... as coming from the communists and then put a lot of psychiatry in it.”

And we’re sitting there, with our chairs tipped back on the front porch, tipped against the house, with our feet up on the railing, and all of a sudden he came down on his chair and he grabs me. And I thought, “I’ve had it !” And he said, “That’s it !”

Then he disappeared into the little front room which was sort of a bedroom and study, and you could hear him in there dictating this book.

Hubbard tried to present the FBI with a copy, but the Bureau expressed skepticism about the document's authenticity. The book is an obvious fake, it has Beria (an early chief of the USSR security and secret police apparatus) using Hubbardisms such as "beingness", "thinkingness" and "pain-drug-hypnosis".

Eventually, Hubbard gave up his attempts to "plant" the booklet somewhere and just had the book published by the Church of Scientology "as a public service".

But see here, they finally found a use for it! No Scientology Fakes are going to waste! Here we have fake evidence, long discredited, pulled out of mothballs in an attempt to smear Anonymous and other critics of Scientology. Not surprisingly, many Scientologists believe these lies.

This is yet another example of how anti-social and dangerously insane the Church of Scientology is.
-
Posted by Just Bill at 5:07 PM

Comments will be moderated. Have patience, I get around to it pretty quick. As a rule of thumb, I won't approve spam, off-topic, trolling or abusive stuff. The rest is usually OK. Yes, you can disagree with me.

I know a number of people want me to write more frequently and I consider that a great compliment.

I would, but I refuse to write just for the sake of writing. I want to have something to say that is worthwhile. I've written a lot and, too often, when I'm researching something I want to say, I find I've already said it, sometimes several times.

When I started this blog, there was a lot of confusion and bad information which I intended to help clear up. I think I did that. Now there are many very fine blogs and other sources of factual information and excellent opinions. Often, when I'm researching something, I find that others have already covered it quite well.

This is wonderful but, I ask myself, what will I write about then?

And, sometimes, I do find something more to write about.


Ask a Question - Make a Suggestion

Please feel free to Ask a Question. If we can, we'll answer it. You can use this to rant, argue and make suggestions as well.

You have my full authorization to copy, quote, link to and reuse any article on Ask the Scientologist.

I'd like it if you gave me acknowledgement as the author and a linkback would be nice -- but not required.

If you alter, correct and/or improve on what I've written, send me a copy. I'd like that.

There are a few people who are pretending to be "Just Bill" and claiming AskTheScientologist is their blog. I have no idea why.

If you are wondering, just know that I have never, and will never email someone claiming I'm "Just Bill". If someone is doing that, they aren't.

This is not an official site of the Church of Scientology. It is not authorized nor does it express official opinions or positions. Any trademarks are the property of the trademark holders.

This blog contains opinions and commentary, if you don't like it, go somewhere else.

Any information given in any answers here is accurate and truthful to the best of our knowledge.